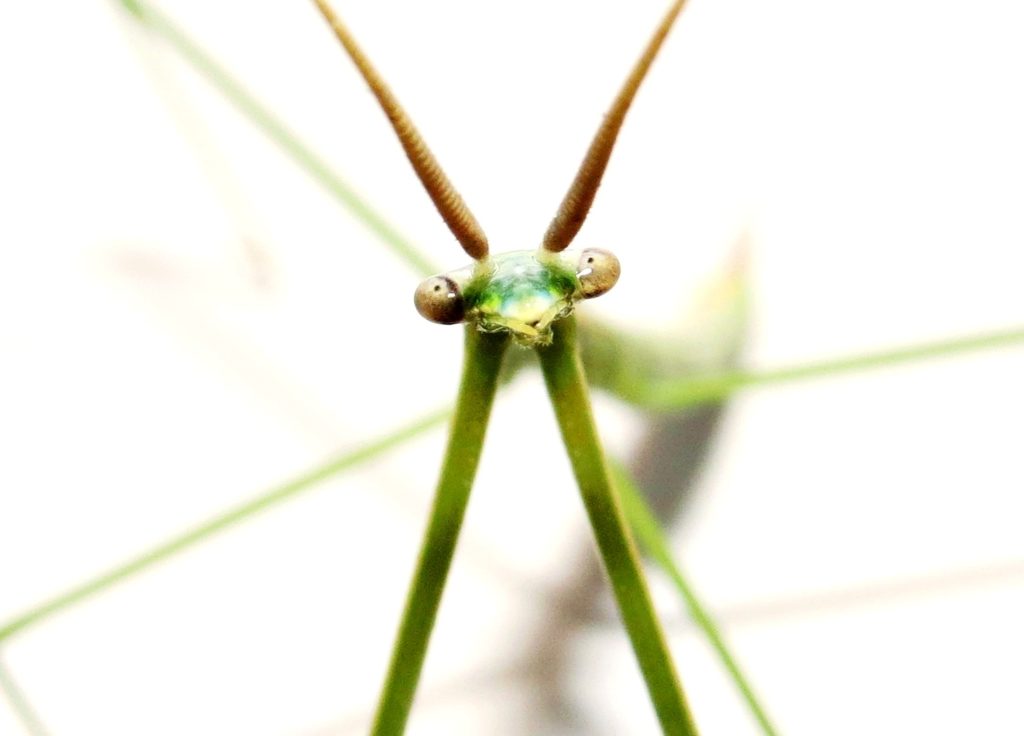 I remember hearing as a child that you were not supposed to stare at a praying mantis because he can make you go blind. Maybe this was just supposed to keep me from picking it up and scaring my sister with it. This belief may come from an idea that a praying mantis can spit a poison at you, but this is not true. Walking stick insects on the other hand can emit a defensive spray that can be painful if it gets in your eyes. But praying mantises are relatively harmless, though they can give you a pinch if you mess with them.

Mantises are an order (Mantodea) of insects that contains over 2,400 species. Mantises are found in temperate and tropical habitats worldwide. Most of them live in the tropics, and often the mantids we see in the United States are exotics from other countries. They have triangular heads with protruding eyes on flexible necks. Their upright posture in combination with their folded forearms have given the name praying mantis. In the southern United States they are also known as devil’s rearhorses, mulekillers, and camel-crickets. The Carolina mantis (Stagmomantis carolina) is the state insect of South Carolina. Most mantises are colored green or brown in color.

They typically live only a year. In colder climates they lay eggs in fall and die. Hard capsules protect their eggs and they hatch in the spring, and as many as 1000 individuals can hatch from one capsule. They may lay the eggs on a plant or directly on the ground. In some species, the mother guards the eggs and moves little until they hatch. In the Brunner’s stick mantis from the southern United States no males of the species have ever been found – females breed parthenogenetically, which means development of the embryos occur without fertilization. Sexual cannibalism is also seen among preying mantis, where the female will eat the male after copulation.

Most mantises are more active in the daytime because they hunt by sight. However, some are more active at night, which provides them protection against birds and other predators that would try to eat them in the daytime. Many mantises are able to avoid predation by bats because they have an auditory thoracic organ that allows them to detect their echolocation calls and avoid them. They typically drop in a circular motion towards the ground when they hear a bat coming close. Most mantises have only one ear, though some (especially those that can’t fly) have none.

Frogs, lizards, birds, spiders and ants prey upon mantises. Mantises main line of defense against predation is camouflage – they blend in with their surroundings. There are even flower mantises that look like flowers, such as orchids, and convince prey to come nearby to gather pollen or nectar. Mantises can turn their heads 180 degrees and have two large compound eyes and three simple eyes to search their surroundings. They are one of the only insects that have stereovision, or 3-D vision, and can perceive depth like humans.

They are formidable predators, striking their prey quickly, almost too quick for the naked eye. Their legs have spikes for snaring prey and keeping it in place. They are ambush predators, which sit very still until prey comes nearby then it snatches the prey. Mantis will eat species much larger than themselves, and have even been known to grab hummingbirds from their feeders.

The earliest mantis fossils are from Siberia. They date from the Cretaceous period and are about 150 million years old, but fossils of mantises are rare to find. One found in amber in Japan in 2008 was believed to be a missing link between ancient and modern day mantises. Previously no mantis fossils from the Cretaceous period had spines on their forelegs, but the one found in 2008 had two spines protruding from its femur.

Praying mantises are often kept as pets, but unfortunately this can also be a way for exotic praying mantises to find their way into the natural environment. They are also sold to gardeners, as they will eat other undesirable insects. However, they may also eat desirable insects like native bees, so this practice is not entirely a good one. The best way to enjoy a praying mantis is to stumble upon one in the wild. And don’t be afraid to take a closer look. They are another interesting creature filling its role in the ecosystem. 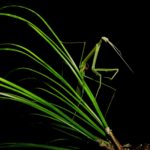 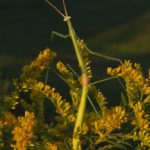 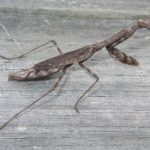 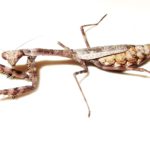 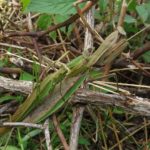 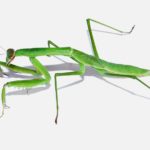 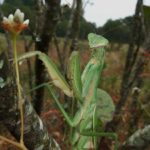 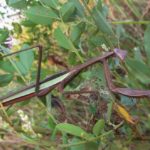