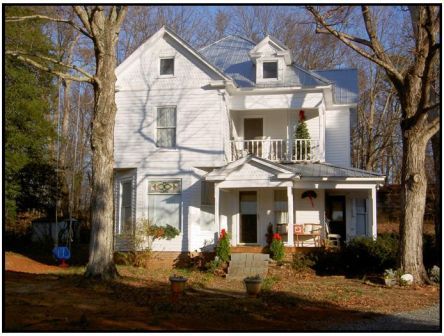 All conservation easement donations are family decisions, but when Mary Teague and her brother, Willard Smith, decided to donate an easement on their 82-acre family farm in Davidson County, the donation became a true family affair. That’s because Mary and husband, James, had already deeded their share of ownership to their two daughters for estate planning purposes, retaining a life estate on the property where they will settle after refurbishing a historic home. Including spouses, eight people signed the easement, a new LandTrust record. But the effort was worth it, creating a new foothold for conservation in this still-rural section of eastern Davidson County.

The property features rolling pasture, mature hardwood forests, about five acres of wetlands, scenic viewshed on Old Highway 64 and Conrad Hill Mine Road, and approximately 4,600 linear feet of tributaries to the nearby Fourmile Branch, which feeds into High Rock Lake. There’s even a family connection to the creek. “This land originally belonged to our ancestor Captain Peter Hedrick, an officer in the Revolutionary War,” says Willard. “The story is that he wassuch an outstanding officer that, in return for his service during the war, he was granted land four miles down the creek and four miles across.” Thus, the name “Fourmile Branch.”

Today, the property’s historic significance is defined primarily by the Victorian house that Mary and Willlard’s grandfather, Grover “Pops” Hedrick, built beginning in 1908. Mary and James are restoring the grand two-story structure, visible from Old Highway 64, where Mary and Willard spent so many happy hours. “As children we were always at that house, either gardening or playing in the attic. Now I’m going home,” says Mary of her restoration efforts. “I like to call the house ‘My Tara,'” she adds with a laugh. The property is also home to an abundance of wildlife—a recent visit revealed numerous deer tracks, while a chorus of frogs sang happily fromthe wetlands. There’s even a ghost! “Some folks used to say you could see either a headless horse, or a horse with a headless rider, walking through the fields,” recalls Willard.

Mary and Willard are proud of their efforts to conserve the family property and are advocates for conservation, reaching out to neighbors and relatives with adjoining properties to educate them about conservation options. “My family has always said, ‘Save the land. Keep the land, they don’t make it anymore. Be good stewards of the land,'” says Mary, explaining their decision to donate the easement. “This was the best way to do it. My mother always wanted us to protect the land, and Pops (her grandfather) would be proud we did. So we just decided to go for it.” A family affair, indeed.