Everything is connected. Perhaps more than any other time in our lives, many of us now realize just how dependent we are on the skills, sacrifice and courage of perfect strangers. Men and women we do not know leave their homes to perform important jobs and critical services, and some put their own health and well-being at risk to protect our lives and property. In this difficult moment in the life of our state and nation, many of us are also “serving” the community by simply staying at home.

In an incredibly short period of time we have changed daily habits and routines at home, school and in the workplace. We have quickly adapted to alien routines— “social distancing” and “sheltering in place”—to “flatten the curve.” We accept the changes because we understand these new behaviors are essential for the common good. Each of us is part of a community, and at no time in my life has this been more clear. We are connected.

Biologists and students of the natural world have long understood that in nature, everything is connected. In our remaining wild places we have all observed functioning ecosystems—natural communities of living things interacting with each other. Plants, animals, fungi and even bacteria have an important place in the natural community. Without beneficial microbes in the soil and specific fungi in natural communities some trees and plants cannot flourish, which impacts the number and type of insects and the birds/fish/reptiles that depend on them.

Which ferns, beetles, wildflowers, butterflies, and tiny fish are of little use to mankind? Which caterpillars and beetles can we eliminate? Should it make any difference to us that a few species of birds, which we rarely see, are sputtering on the edge of oblivion?

One of the founders of the modern environmental movement, Aldo Leopold, developed his “land ethic” in the 1949 classic, Sand County Almanac. Leopold wrote: “…(O)nly a fool would discard seemingly useless parts? To keep every cog and wheel is the first precaution of intelligent tinkering.”

We are too often unaware of the profound impact a tiny piece of the natural mosaic has on the plants and animals around it. And in the past, we have all been guilty of discounting the importance of the work and contributions of strangers.

This April we have the time—and the social distance between us—to consider the wisdom of Aldo Leopold’s advice to keep “every cog and wheel.” It is also an opportunity to remember the natural communities we have observed in the springtimes of our memory in the mountains, Piedmont, and coastal plain. Nature teaches us that we are dependent on the services, skills, and sacrifice of all members of the same community. Be thankful for the intricate relationships found in nature…and thankful for your friends, neighbors and perfect strangers of the North Carolina family. And who knows, celebrating all of our communities and connections may be habit-forming?

With good health, strength and endurance to all Tar Heel cogs and wheels…

North Carolina’s Natural Heritage program has identified over 300 distinct natural communities. These communities are comprised of associated plants, animals, and even fungi and bacteria. Each tiny part plays a role in the success and survival of the community. The photographs of a Carteret County salt marsh (Photo 1),  Hanging Rock’s rocky summit (2), a rich cove forest near Black Mountain (Photo 3), and a Jackson County waterfall/spray-cliff community (Photo 4) represent only a hint of the diverse natural communities in North Carolina. These magnificent birds are no longer common in their natural communities. One of my favorite coastal birds, the graceful black skimmer, with a tucan-like bill, is now found on only a few Tar Heel beaches (Photo 1). Although not rare, gaudy oystercatchers are a welcome sight in the new green of an April salt marsh (photo 2). Their specialized bills show they have a special job in their natural communities. 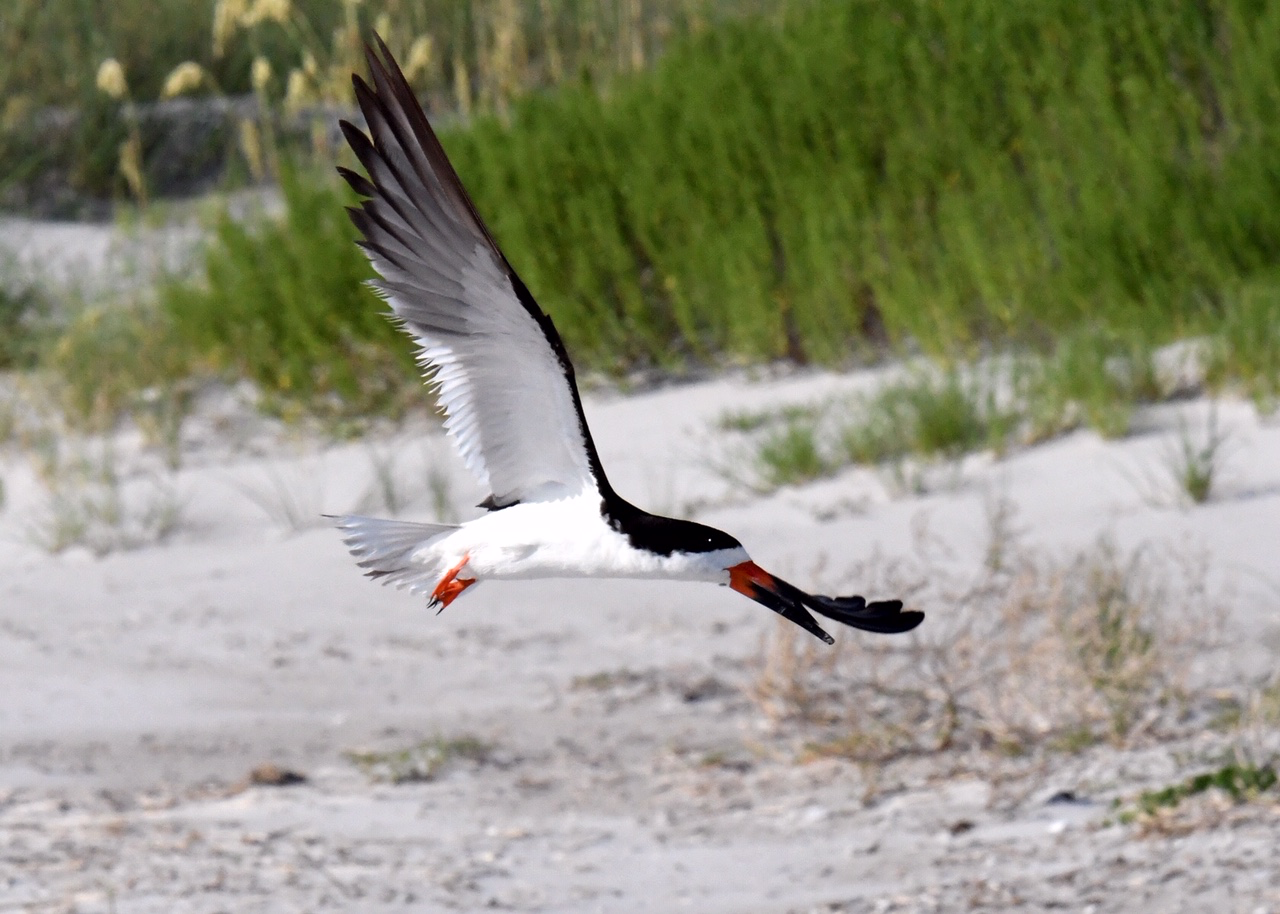 North Carolina is a fungi capital of the world with an estimated 8,000 species of fungi within our fields and forests. Each species has a function and a role in a natural community. Although roles and functions are sometimes difficult to define, I wouldn’t want to lose any of them. Fungi, too, are cogs and wheels. Some of the most vivid memories of my childhood come from the slow-moving creeks and small farm ponds in Davidson County, all of which were home to native crayfish (photo 1) and sunfish (photo 2). I had no idea at the time the two creatures were integral parts of a natural community. Some of the most colorful members of Tar Heel natural communities are insects. Cicadas (Photo 1) appear in the spring and early summer as do a myriad of shiny beetles, like this ground beetle (Photo 2) 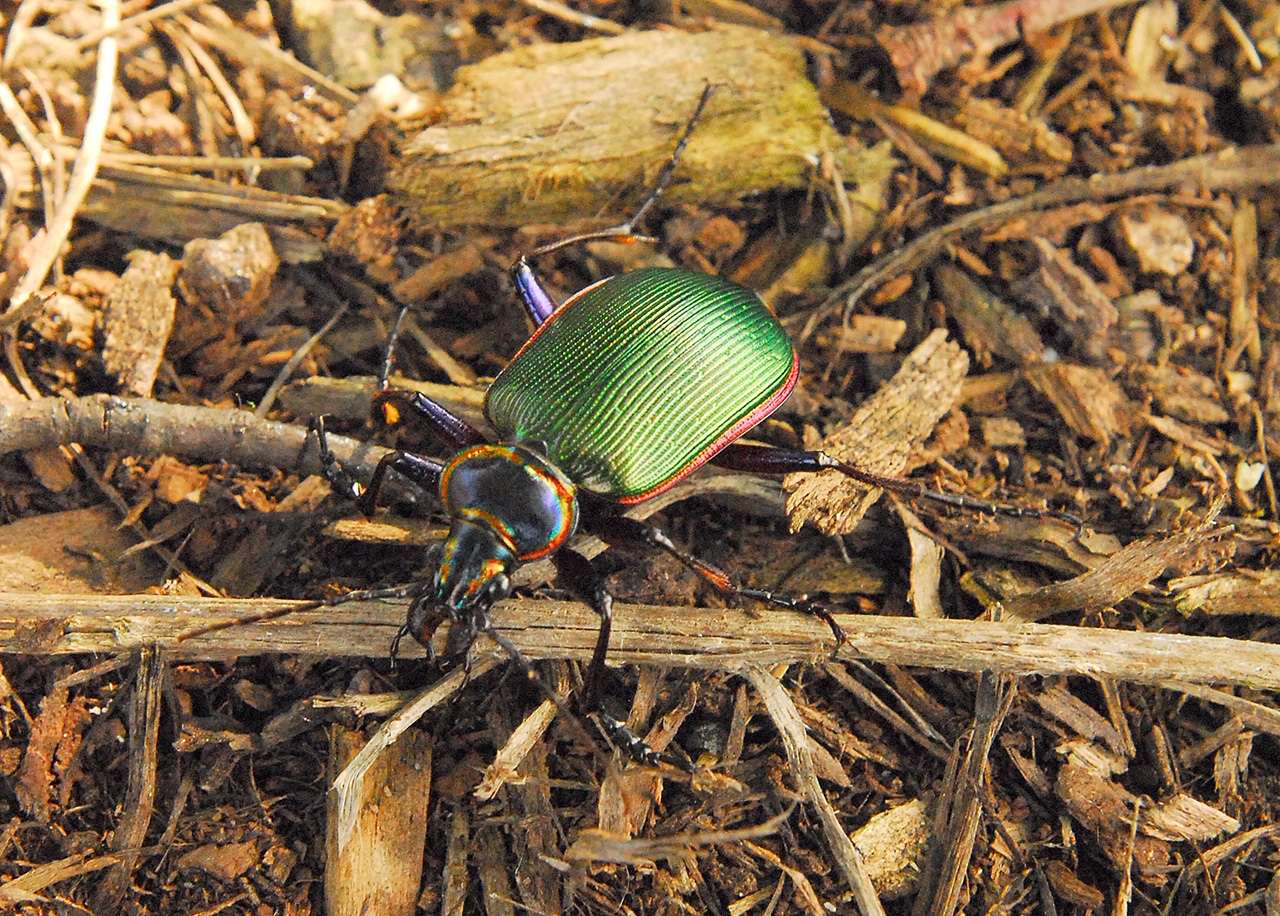 In the Triangle’s Umstead State Park, April is a time to celebrate floral members of the natural world, including our delicate, native Pinxterbloom azalea (Photo 1) and the simple beauty of a flowering Mayapple (Photo 2). Again, each is a “cog and wheel” of a natural community and of the Tar Heel experience. “Only a fool would discard seemingly useless parts.” 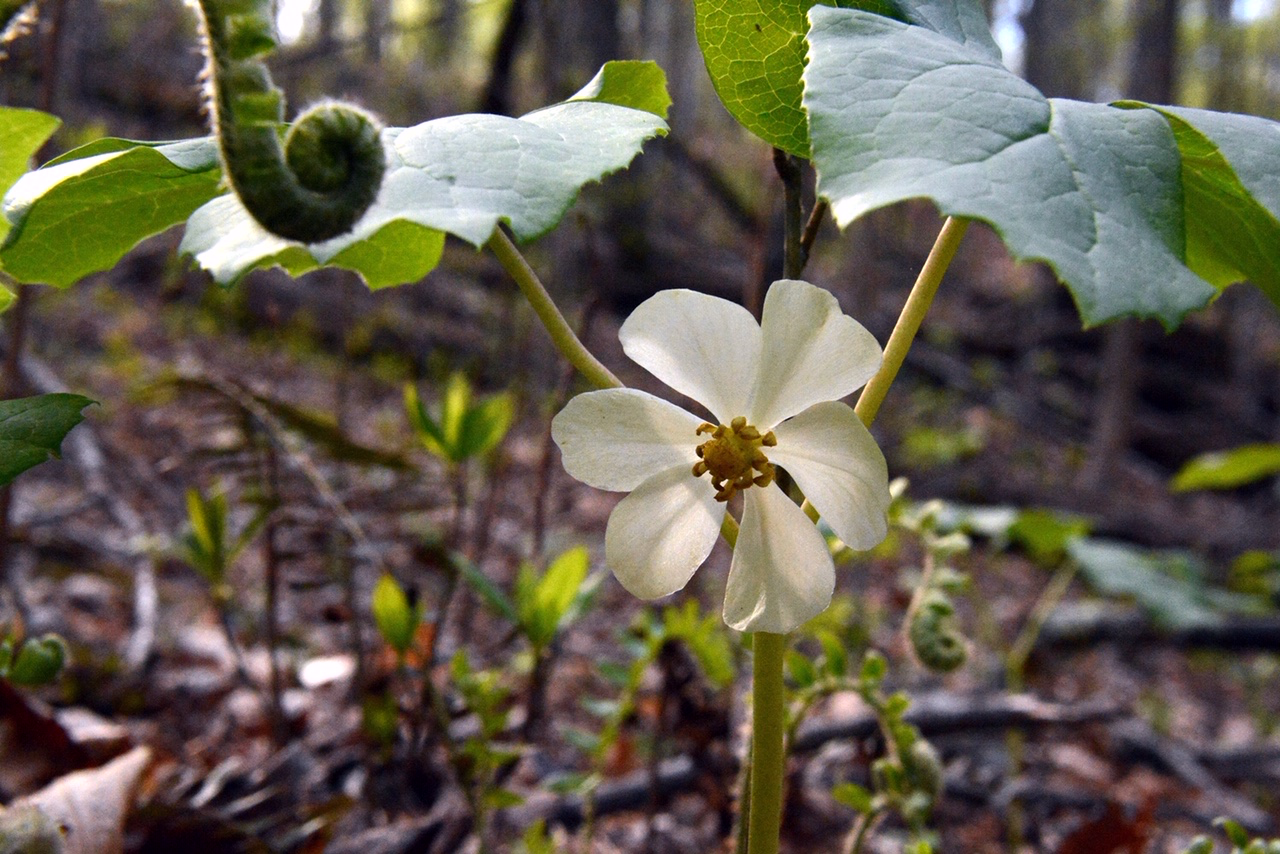