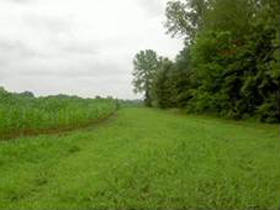 Like their great-grandfather Dr. James Franklin Beall,* Jim Beall Graham and his brother, Charles Graham, have taken a heroic step to insure their legacy family farm in Davidson County stays intact. In 1872, it was Dr. Beall saving the farm from forced sale at an auction on the Lexington Courthouse steps. One hundred thirty-one years later, it was Jim and Charles signing a conservation easement halting the otherwise inevitable path of development along the I-85 corridor.

Historically known as “Beallmont Farm,” the property rests just east of the interstate along Belmont Road in Linwood, North Carolina. The sprawling farm, which in total claims well over 500 acres, has been in the same family since 1763. It was at that time that King George III of England, acting through Lord Granville, granted the land to Jim and Charles’ forefathers. And, despite the numerous family farm owners that have held other jobs along the way (including state legislators, county commissioners, educators, and physicians), Jim and Charles are now the sixth generation to perpetuate agricultural practices on their land.

The farming practices utilized include all the latest innovations in sustainable conservation agriculture and federally recommended best management practices. They include never-till crop production, riparian buffers, field stripping, rotational grazing and cropping, and controlled chemical application. Additionally, great capital expenditures have been made to outfit the farm with modern agricultural infrastructure, from renovated dairy machinery to three new silos.

Another structure existing on the farm is the historic early 19th century Beallmont homeplace, which was listed on the National Register of Historic Places in July, 1984. The goal of the Graham Family is to complete the farm’s preservation using a phased approach. This first phase comprised 124 acres situated on the north side of Belmont Road.

Clearly this leg of the project was made possible only through the conservation ethic of the Graham Family. However, both the North Carolina and U.S. Departments of Agriculture played an important role in aiding the Graham Family in fulfilling their conservation goals. Programs funded by the N.C. Farmland Preservation Trust Fund and the National Resources Conservation Service assisted in partially mitigating the financial disadvantage incurred by restricting the farm from future residential or commercial development.

*Dr. James Franklin Beall was a medical doctor for the Confederacy. He was a ranking officer for the North Carolina 21st Division, and served in several celebrated Civil War battles, including tending to the dying Lt. General Thomas J. “Stonewall” Jackson at Chancellorsville (May 2, 1863).